Looking Back 10 years: From Castle to CogSci

In 2004, a year before the campus officially opened, two founding faculty began laying groundwork for what has now become an already internationally recognized cognitive science program. Teenie Matlock came to UC Merced from Stanford University, and Jeff Yoshimi, from UC San Diego – both were postdoctoral researchers. They had very different backgrounds, but had a common vision: To create a highly visible cognitive science program at a brand-new UC campus. Housed at Castle Air Force Base in 2004, the two designed the first COGS undergraduate courses, outlined what would eventually become an undergraduate major, and garnered support from UC Merced administrators. About a decade later, next summer 2015, this program’s faculty will be organizing the field’s premiere conference, known affectionately as “CogSci.” 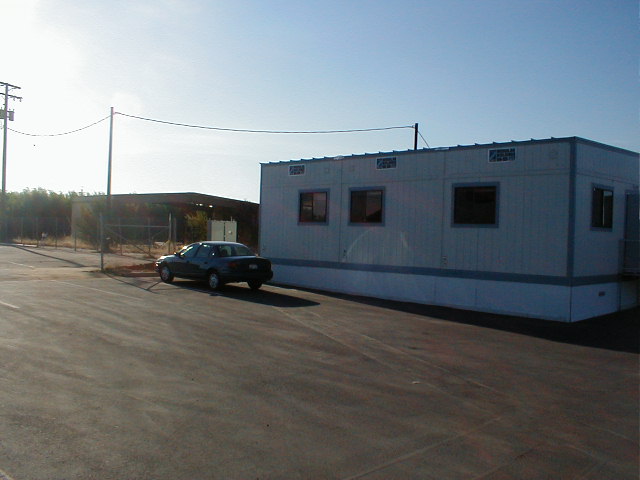 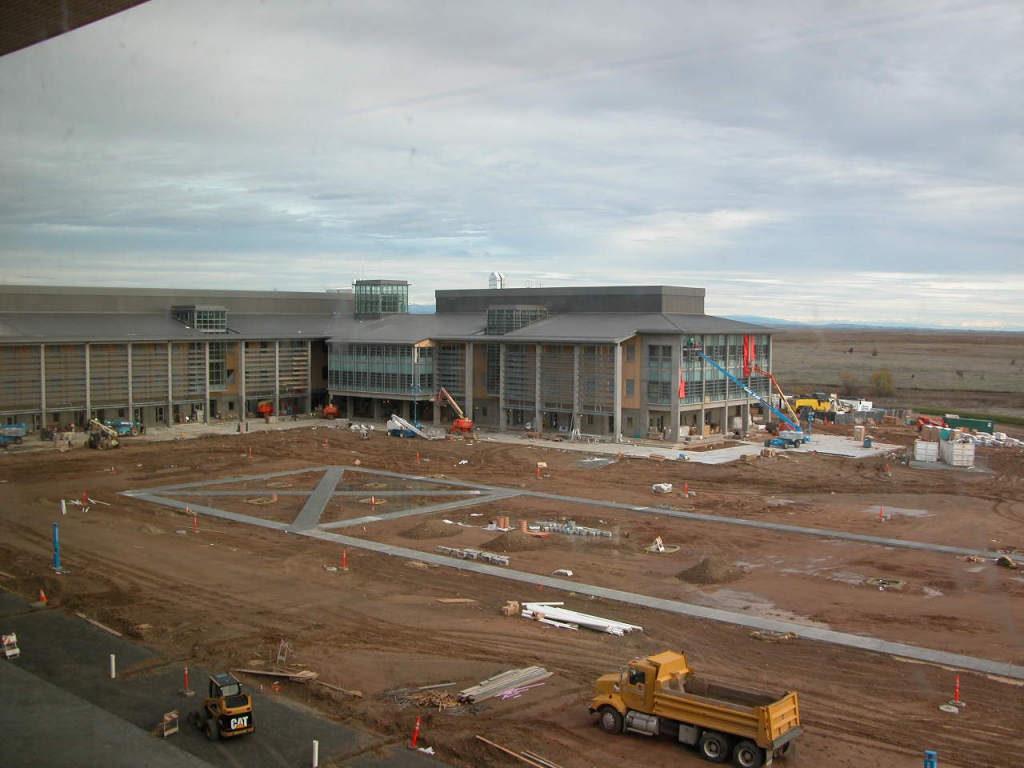 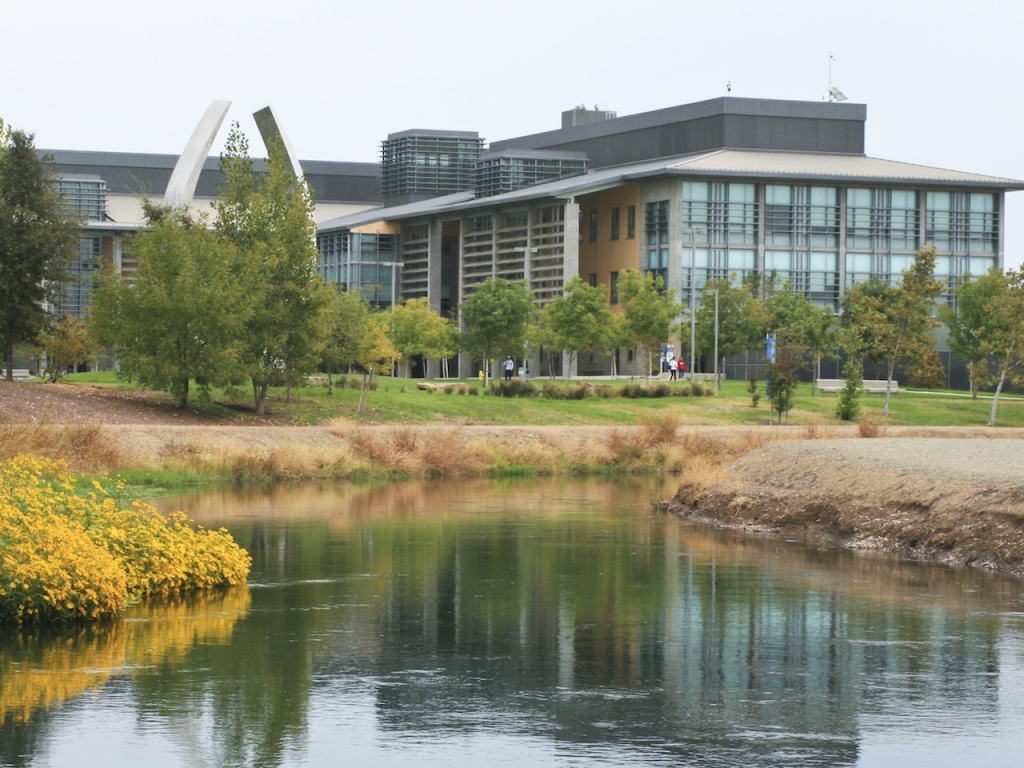 Matlock and Yoshimi talk about what it was like to be in start-up mode. “Getting the program off the ground wasn’t easy. It required a lot of hard work and persistence,” says Matlock, “We kept forging ahead because the vision was feasible and the timing was good. Cognitive science as a field was beginning to take off.” Yoshimi added, “It was exciting to be involved in the early planning stages and to watch the program grow over the years. We have made many great hires and have attracted terrific students.” They both expressed gratitude to several senior colleagues on the campus who helped guide planning.

In 2004-2005, Matlock launched the Mind, Technology, and Society talk series, which is now in its 10th year of existence, and continues to bring weekly speakers from diverse fields and from around the world to present at UC Merced. Soon after its inception, the seminar became supported by the Robert Glushko and Pamela Samuelson Foundation, which also supports the prestigious Rumelhart Prize in Cognitive Science. With this support, the seminar series blossomed into an active and very successful weekly talk series.

Matlock also put together an advisory board that included leading cognitive scientists, such as Alva Noë, Donald Norman, Larry Barsalou, Patricia Churchland, Gary Cottrell, and Paul Smolensky. Around the same time, she and Yoshimi also organized the UC Merced Cognitive Science Planning Workshop to elicit input on how to create and sustain a new cognitive science program. At first, there was debate about the potential for a cognitive science program, including from some administrators who have since left UC Merced. Through intense effort by Matlock and Yoshimi, cognitive science prevailed, and after barely a decade their efforts have borne considerable fruit.

Yoshimi talks about how exciting it was to come to a new campus and build a new campus and department from the ground up. Yoshimi recalls “…how in the first year the campus itself was not opened so our offices were in trailers behind a repurposed air-force office building. We would take candidates to a park nearby and just look at the campus from across the park. The whole school was effectively one department. My officemates in the trailer were professors of Chinese history, Spanish literature, cell biology, and mathematics. We would have lunch at Jantz’s and the burger cafe adjoining the Castle Air Museum. On the first few days of classes after we opened we taught in the open area of the library. People would walk around in the stacks in the background, and occasionally stop to listen to the lecture. It was all very exciting. After that (and still to this day), there was always something new being built, some patch of dirt being refashioned into a bit of campus infrastructure. There were always cows visible out the windows so I would constantly use them for my examples — and that is also still true!”

Matlock remembers teaching the first Introduction to Cognitive Science course to 100 students in construction zone inside the nearly completed library. “We had to hire a teaching assistant from nearby CSU Fresno because we had no cognitive science graduate students then. Many students from that class became our first cognitive science majors. Some went on to become quite successful. One is now a lawyer and some others are working for high-tech companies. I’ll always remember those early students — special people, true pioneers.” 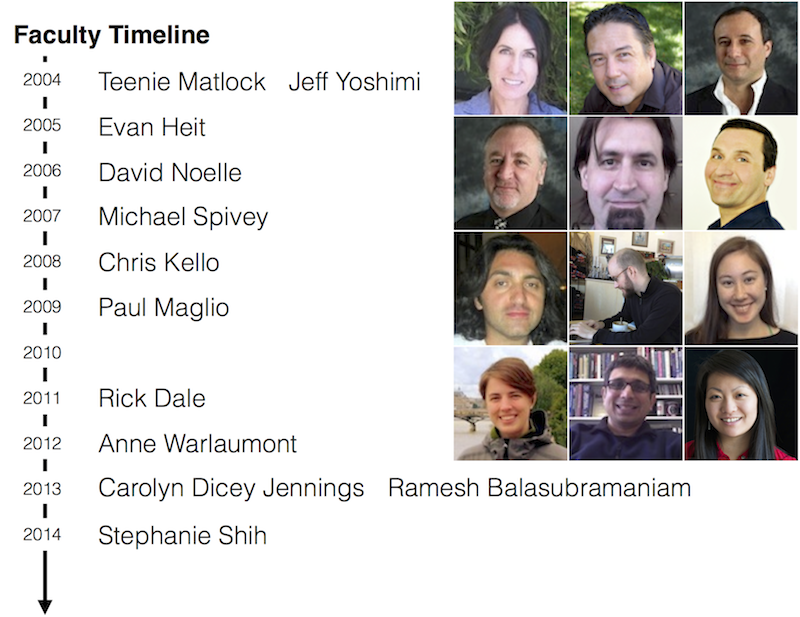 CIS faculty organized a cutting-edge workshop called “Future of Cognitive Science,” held at UC Merced in 2009. This NSF-funded conference featured speakers from across a range of disciplines, and wide recognition for the emerging program.

Since that early time, the arrival of several new colleagues helped boost efforts for organizing the faculty group, and its undergraduate and graduate programs. These included David Noelle who arrived from Vanderbilt University, Michael Spivey from Cornell University, and Chris Kello from George Mason University. The now-larger team of faculty worked together to assemble new programs and goals for the emerging cognitive science group, which by this time was operating out of the Classroom and Office Building (COB), sharing only a small laboratory space, amidst a growing body of undergraduate and graduate students who were also in COB attending classes. By 2010, the faculty launched an official Cognitive & Information Sciences Ph.D. program. 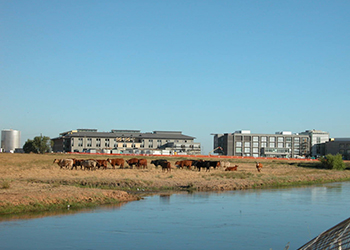 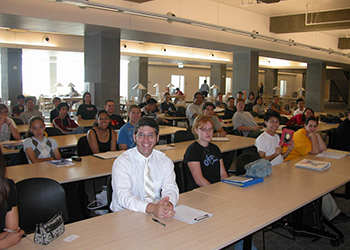 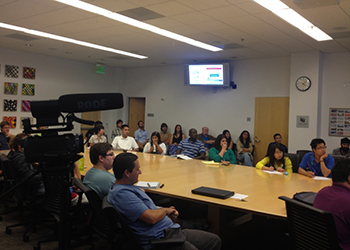 In 2011, the Cognitive & Information Sciences (CIS) faculty group and almost 20 Ph.D. students entered the new Social Sciences and Management Building (SSM). The group has hired many impressive cognitive scientists and attracted first-rate students since its inception. Ph.D. students in this program are presenting their research at conferences all over the world and publishing research findings in top journals in cognitive science and related fields. In fact, the group has achieved such a size and presence that the Cognitive & Information Sciences group makes UC Merced stand as one of the top 5 universities at the Annual Meeting of the Cognitive Science Society, attended by hundreds of universities involving almost 1,000 research presentations. It is in no small part due to the research endeavors of the wonderful Ph.D. students who are now enrolled in the CIS program. 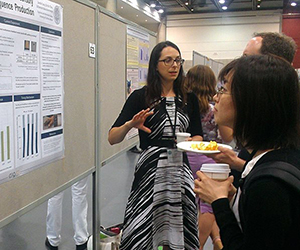 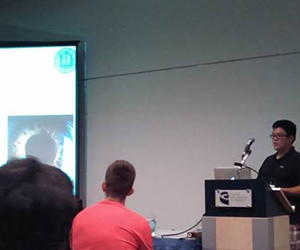 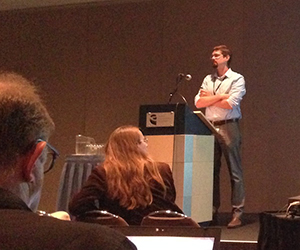 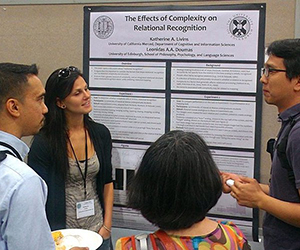 The group’s most recent faculty hire, Assistant Professor Stephanie Shih, a recent Stanford Ph.D., likes the pioneering, interdisciplinary spirit of the group. “It’s very exciting to be a part of a team that puts interdisciplinary research and teaching at the forefront. It’ll be interesting to see how this collaborative unit continues to grow in the coming years, both at UC Merced and in the field of Cognitive Science at large.”

Finally, the CIS faculty group organized the Annual Meeting of the Cognitive Science Society for 2015 held in Pasadena. As just noted, the conference is attended by hundreds of universities, from dozens of countries, and attended by over a thousand scientists from a variety of fields. After only 10 years, Matlock and Yoshimi are helping lead this team of faculty in organizing the premiere conference in the field. It is a signature accomplishment of a group that continues to accumulate new accomplishments, a group that has come from Castle to CogSci.