Skip to content Skip to navigation
See our Campus Ready site for most up to date information about the fall semester.Campus Ready
UNIVERSITY OF CALIFORNIA, MERCED

His Holiness the 14th Dalai Lama has long supported scientific study, making bold statements like: “If scientific analysis were conclusively to demonstrate certain claims in Buddhism to be false, then we must accept the findings of science and abandon those claims.” In hopes of fostering dialog between the world’s scientific community and Tibetan Buddhist scholars, the Emory-Tibet Science Initiative (ETSI) has orchestrated a variety of programs to support science education for monks studying at Tibetan Buddhist Monastic Universities located in protected communities in India, to which many Tibetans have fled since China’s occupation of Tibet.

ETSI supports a six-year intensive summer school program, taught by Western academics but held at three different monasteries in India. Monks learn about topics of particular relevance to them, including the philosophy of science, physics, biology, and neuroscience. This last summer, two CIS faculty participated in this summer school program. Dr. Carolyn Dicey Jennings and Dr. David Noelle taught introductory neuroscience at two different monasteries. Monks learned about fundamental aspects of the brain and how it supports perception, action, and cognition.

For more information, including videos, see page 24 of the Fall 2015 issue of UC Merced Magazine. 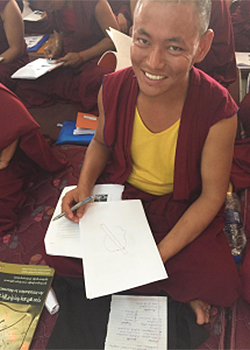