CIS faculty, led by Professor Ramesh Balasubramaniam, have secured NSF funding for the next CHASE (Center for Human Adaptive Systems and Environments) Summer School. This will be the second such summer school, organized by UC Merced faculty affiliated with CHASE.

The first, held in 2014, was on the Dynamics of Language and Music. To be held in 2018, the second summer school will be on the topic of Dynamic Interaction of Embodied Human and Machine Intelligence.
From the grant:
For several years, research in cognition has viewed mental operations as being separate from the body in which the brain is housed. Such a disembodied view has led to the belief that the study of the human mind is possible without reference to the body, its perceptual and motor systems and the physical interaction with a smart environment. In this proposal, we take and extend the view that cognition is better represented as a system that includes bidirectional interactions between the sensorimotor apparatus and the environment. In this approach, cognition, commonly believed to involve reasoning, categorization, search and classification, memory, language and problem solving, is studied in the context of its relation to the sensorimotor system. There are many interesting efforts afoot in the study of cognition and robotics that address issues related to human-machine interaction and the embodiment issues that arise from such interactions. However, we are still far from developing a careful, methodical approach for understanding cognition in the context of the body and its physical interaction with an intelligent environment, one that is predictive and adaptive. While the field of embodiment has focused on how the physical dynamics of the body influences cognition, there is precious little work on extending this thinking to the study of the physical interaction between humans and intelligent adaptive machines and objects that they interact with. 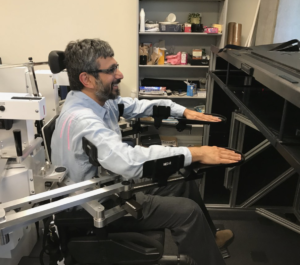 With support of the National Science Foundation, CHASE and affiliated researchers will develop and organize a workshop to equip researchers identify the key interdisciplinary knowledge and expertise necessary to advance research and applications in intelligent adaptive systems. This workshop complements the other activities of CHASE including the NSF National Research traineeship, the recent NSF robotics Major research infrastructure grant. This grant will provide a great opportunity for not only CIS students but also students involved in the study of intelligent adaptive systems in several other units on campus.