In Fall 2019, Cognitive & Information Sciences welcomes a new Assistant Professor Dr. Hanna Gunn. We asked Hanna about her background, research interests, and why she’s excited about UC Merced. See her responses below.

I thought I was going to be a linguist because one of my uncles gave me two books when I was in my mid-teens, one on Chomsky and the other on the Sapir-Whorf's linguistic relativity theory. My uncle had hoped I'd be a physicist like him, and I'd thought maybe I would too but that was short lived when I realised I wasn't too fond of maths. What ended up happening in my undergraduate studies (University of Canterbury in Christchurch, New Zealand) was that I became very interested in the philosophy of mind. In my second year I ended up in two courses that I think really drew me into both philosophy and, in particular, ethics and subjects about the mind. These were "Bioethics: Life, Death, and Medicine", and "Cyborgs, Cyberspace, and The Meaning of Life". From there, I went to write an honours thesis defending Fred Dretske's theory of phenomenal consciousness. I ended up a philosophy graduate programme at the University of Connecticut, Storrs, thinking that I would continue working on similar subjects in the philosophy of mind - I'd almost decided to jump ship to psychology at this stage. Long story short, I came across the epistemic subject of rational persuasion and realised that I was very interested in how and how we should form our beliefs about the world. I've ended up an ethically-concerned social epistemologist instead!

My current research looks at how our philosophical and folk assumptions often undermine our epistemic and communicative ideals. Put differently, I'm interested in the blindspots that we have to our own bad behaviour as speakers, listeners, and knowers. Recent work has included looking at the ways that these assumptions and expectations undermine public discourse, and in particular online discourse. I've been working on defending the idea that we actually can't justify treating one another online in the ways that we often do -- shaming, trolling, dismissing, etc. There's an interesting assumption that "online life" is somehow morally and epistemically distinct from "offline life", and so we have different standards for behaviour there. I'm not yet convinced that this is the case! Honestly, I suspect some of it might just be plain old bullying. Alongside this, I'm working on topics in the applied ethics of data science, the Internet, and artificial intelligence. Unsurprisingly, a thread in this work has been noting the ways that we regularly fail to live up to our own moral and epistemic standards. Again, I think, plausibly owing to the misguided assumptions that digital life of various forms isn't "real" and that quantitative measures are morally neutral.

I really enjoy teaching epistemology, and applied epistemology in particular. This includes subjects like post-truth, fake news, conspiracy theories, and then ethical subjects like epistemic ignorance and epistemic injustice. I'm hoping to teach a version of the bioethics course I mentioned above as being one of the things that drew me into philosophy. Bioethics ranges over a lot of subjects in applied ethics including things like stem cell research, human cloning, euthanasia, environmentalism, and animal testing. I've been recently mulling over the idea of a course on lying and deception, this would include philosophy of language on understanding what lies are, but would also take us on a tour through the research on animal cognition and deception -- it's a fascinating subject!

My answer here is probably the obvious one -- the interdisciplinarity of the department. My attempt to find a major through my undergraduate studies really took me through many of the core areas of cognitive science: philosophy, linguistics, sociology, psychology. It was a really exciting opportunity to be able to end up in a job that would, in a way, bring me back to that period of life where I have the chance to keep exploring a wide range of disciplines -- we often end up specialising in our careers in ways that mean we don't have this chance to keep on learning like this. UC Merced itself is a new university, and one that shared a lot of core values and missions that I had hoped to be able to act on as an academic. There's also a serious attitude here about teaching well and professional development in teaching, as someone who cares deeply about education this really stood out to me too. 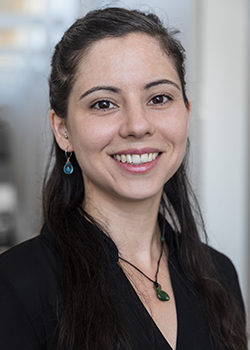