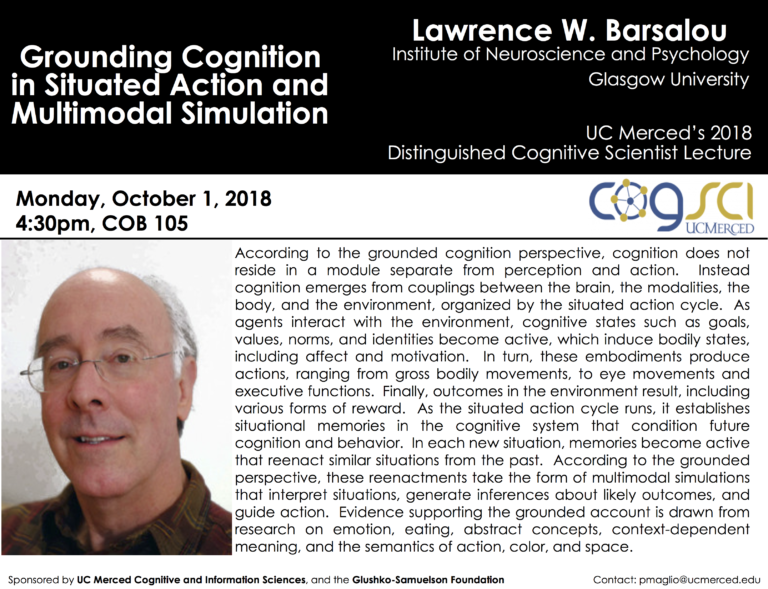 Abstract: According to the grounded cognition perspective, cognition does not reside in a module separate from perception and action. Instead cognition emerges from couplings between the brain, the modalities, the body, and the environment, organized by the situated action cycle. As agents interact with the environment, cognitive states such as goals, values, norms, and identities become active, which induce bodily states, including affect and motivation. In turn, these embodiments produce actions, ranging from gross bodily movements, to eye movements and executive functions. Finally, outcomes in the environment result, including various forms of reward. As the situated action cycle runs, it establishes situational memories in the cognitive system that condition future cognition and behavior. In each new situation, memories become active that reenact similar situations from the past. According to the grounded perspective, these reenactments take the form of multimodal simulations that interpret situations, generate inferences about likely outcomes, and guide action. Evidence supporting the grounded account is drawn from research on emotion, eating, abstract concepts, context-dependent meaning, and the semantics of action, color, and space.

Biography: Lawrence Barsalou is Professor of Psychology at the University of Glasgow in the Institute of Neuroscience and Psychology. He received a Bachelors degree in Psychology from the University of California, San Diego in 1977, and a Ph.D. in Cognitive Psychology from Stanford University in 1981. Since then, Barsalou has held faculty positions at Emory University, the Georgia Institute of Technology, and the University of Chicago, joining the University of Glasgow in 2015. Barsalou’s research addresses the nature of human conceptual processing and its roles in perception, memory, language, thought, social interaction, and health cognition. A current theme of his research is that the conceptual system is grounded in situated conceptualization, multimodal simulation, and embodiment. Specific topics of current interest include the roles of conceptual processing in emotion, stress, abstract thought, and appetitive behavior. His research has also addressed the dynamic online construction of conceptual representations, the development of conceptual systems to support goal achievement, and the structure of knowledge.