The University of California, Merced Cognitive and Information Sciences Faculty proudly present the 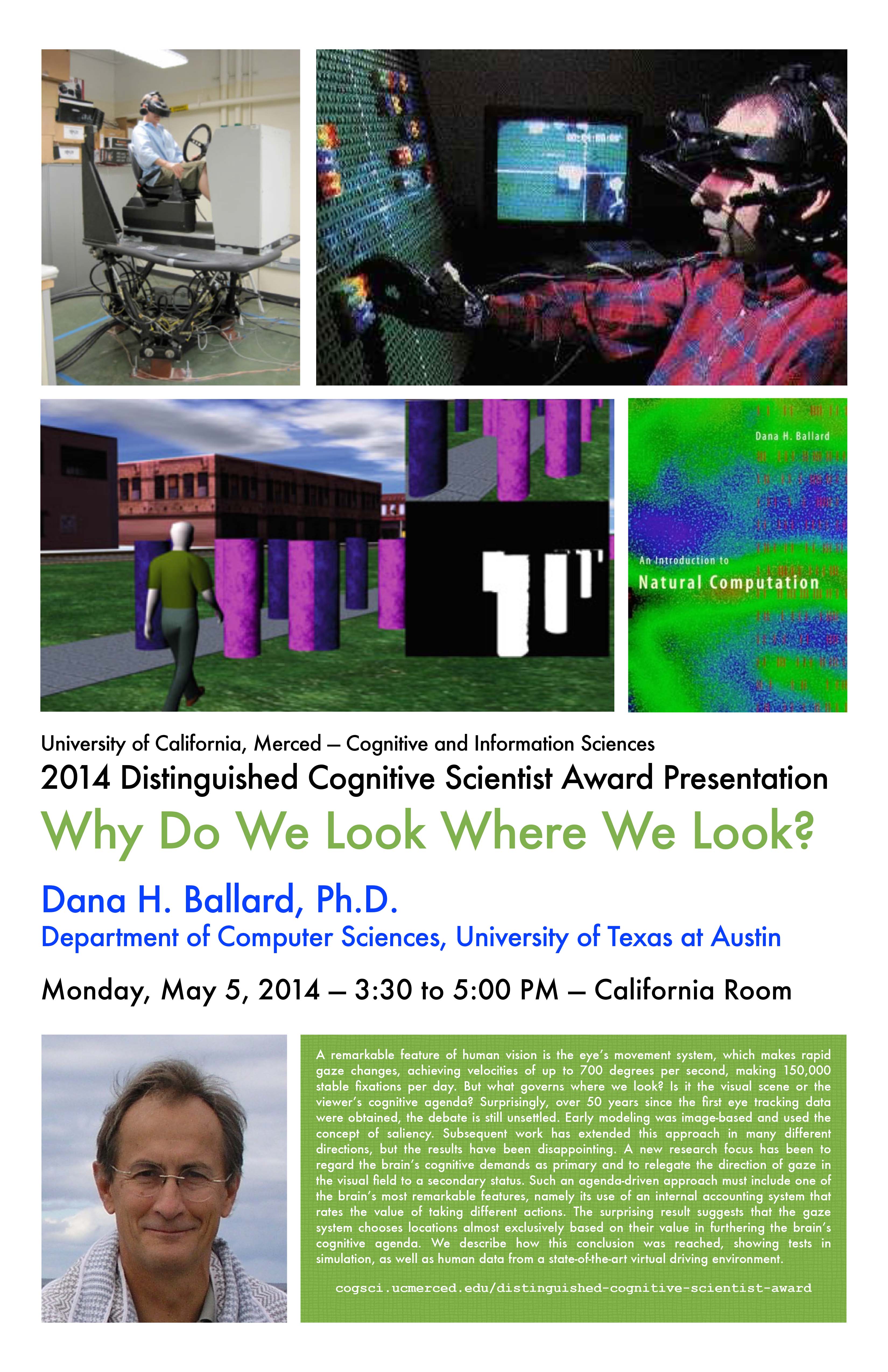 Dana H. Ballard, Ph.D.
Professor of Computer Science
Professor in the Center for Perceptual Systems
University of Texas at Austin

Title: WHY DO WE LOOK WHERE WE LOOK?

Abstract: A remarkable feature of human vision is the eye’s movement system, which makes rapid gaze changes, achieving velocities of up to 700 degrees per second, making 150,000 stable fixations per day. But what governs where we look? Is it the visual scene or the viewer’s cognitive agenda? Surprisingly, over 50 years since the first eye tracking data were obtained, the debate is still unsettled. Early modeling was image-based and used the concept of saliency. Subsequent work has extended this approach in many different directions, but the results have been disappointing. A new research focus has been to regard the brain’s cognitive demands as primary and to relegate the direction of gaze in the visual field to a secondary status. Such an agenda-driven approach must include one of the brain’s most remarkable features, namely its use of an internal accounting system that rates the value of taking different actions. The surprising result suggests that the gaze system chooses locations almost exclusively based on their value in furthering the brain’s cognitive agenda. In this presentation, Dr. Ballard describes how this conclusion was reached, showing tests in simulation, as well as human data from a state-of-the-art virtual driving environment.

Bio: Dr. Ballard received a B.S. degree in Aeronautics & Astronautics from the Massachusetts Institute of Technology, an M.S. degree in Information & Control Engineering from the University of Michigan, and a Ph.D. in Information Engineering from the University of California, Irvine. He developed innovative artificial intelligence methods for radiology and medical image processing. With Christopher M. Brown, he authored a pioneering textbook on computer vision. His work popularized the use of the generalized hough transform for visual object detection. His extensive studies of the human visual system, focusing on interactions with motor control systems and task constraints, have led to fundamental changes in how perceptual processes are conceived, and these insights caused him to be an early proponent of “active vision” approaches to machine vision. Dr. Ballard was also a pioneer in the investigation of biologically based approaches to computation, including neural networks, reinforcement learning, and evolutionary algorithms. After over 30 years at the University of Rochester, he joined the faculty of the University of Texas at Austin in 2006.

For his many important contributions to artificial intelligence, computer vision, and our understanding of human perceptual-motor systems, as well as his general support for the cognitive science community, the Cognitive and Information Sciences faculty of the University of California, Merced have named him the winner of the 2014 Distinguished Cognitive Scientist Award. His talk will be free and open to the public.